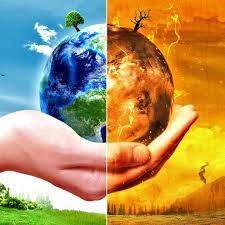 What we are talking about here is the suggestion that climate change problems will be resolved, simply because (it is imagined) the world’s environment may inevitably be tuned to self-correct. The proposal was developed by Dr Lovelock in the 1970s and has been refined by others. Lovelock adopted the name Gaia, as in mythology she was supposedly a goddess who controlled the Earth. It is a bit unfair to use the rather shorthand description of the hypothesis in our first sentence. The scientific community would have good reason to take issue with it, since the proposers and rejecters of the hypothesis have armed themselves with more supporting data than would fit in all the blogs on this website! In terms of explanatory value, the Gaia hypothesis is rather frightening, as it seems it’s outworking would currently necessitate either a significant reduction in human population, or reversion to pre-industrial age living standards, or both! Is the human race even facing extinction? Yet the hypothesis assumes continuity of life, but without explaining Life’s origin (a fatal flaw also in the belief of some that everything can be explained by evolution, because nothing can evolve until it exists).

The Gaia hypothesis is not intended to have any religious merit; it is supposed to be purely based on natural science observations. However, reportedly noted adversaries of the hypothesis include well-known atheists. Atheists object to such hypothetical Gaia-type conclusions in part because they do not think the universe, or even our small corner of it, is purposeful. They believe, with great confidence, that random purposeless events are the cause for what we can now see and experience, and biologically DNA conveniently secures continuity of favourable outcomes. So the idea that there may be some inbuilt aspects, actually designed to favourably correct unwanted changes in the Earth’s environment is immediately rejected. Christians should have no such problems with the thought of design being evident in the universe, but that doesn’t mean they should just accept a secular Gaia-type hypothesis. If you’re interested, read on HERE.