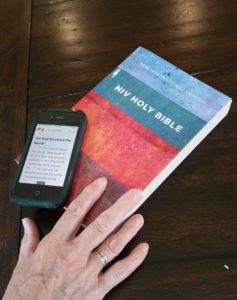 Why not try our Bible Reading Plan, to read the whole Bible over three years? Its updated a week at a time each weekend.

A just-published scientific paper is getting a lot of media attention. This is mainly because one hypothesis from its various conclusions is that some form of microbial life might exist in the clouds of the atmosphere of Venus (because Phosphine -PH3 may have been detected there). We may ask ourselves two questions: first, is the hypothesis the only possible explanation of the scientific findings, and second, if the hypothesis were to be proven to be valid, would it then question a biblical understanding of the universe?

As to the first question, we should quote from the paper itself: “Even if confirmed, we emphasize that the detection of PH3 is not robust evidence for life, only for anomalous and unexplained chemistry. There are substantial conceptual problems for the idea of life in Venus’s clouds—the environment is extremely dehydrating as well as hyperacidic.”

It is easy to understand why the latest report is “not robust evidence of life.” If a form of life were amazingly responsible for the presence of phosphine – only in those clouds that are higher than 50km above the surface of Venus – it would then lead to even more speculative questions, like where did it come from and how could such life that produces PH3 exist, either in the highly acidic clouds, or down on the surface of the planet (where the temperature is said to be above 400 degrees), or anywhere in between?

The old adage, give a man a hammer and suddenly everything else becomes a nail, might have some apparent application here. The hammer is the desire of some scientists to prove the existence of life anywhere else but on earth; there is then no shortage of potential nails! Scientists themselves know about this risk, and the careful approaches used by those publishing the latest paper should be appreciated. The media will likely have a heyday suggesting life has been detected on Venus. That is certainly no more than a less than robust hypothesis, and those more competent to make assessments are already noting obvious qualifiers to such an unlikely conclusion.

But what if (in the real rather than imagined world) some form of life exists on Venus? Does that mean the Bible is wrong, or the Gospel is outdated? Not at all! The simple answer to the second question we asked is that to find life somewhere else in the universe would not require Christians to change their minds about the Bible. This is not a reason to enter the debates on origins, i.e. how long creation took; what is the role of evolution, etc. The Bible simply says God created the universe, not how He did it. Nor does it say God did not allow any form of life anywhere else but Earth. We should avoid red herrings!

Instead, what remains absolutely essential is to grasp what the Bible does say specifically about mankind on Earth, not what it doesn’t say about microbial life, here or anywhere else. For those interested in a summary of biblical statements about mankind’s need and God’s answer to it, a starting point could be to click HERE and read the booklet “Key Doctrines of the Christian Gospel”, or just contact us for answers to specific questions.